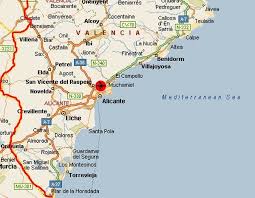 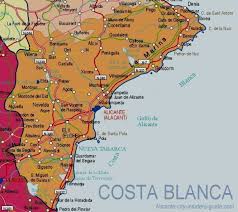 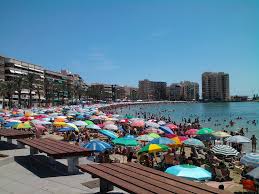 In English "The White Coast") refers to over 200 kilometres (120 mi) of the Mediterranean coastline in the Alicante province of Spain. It describes the shoreline on the south eastern coast of Spain. The name "Costa Blanca" was devised as a promotional name used by BEA when they launched their new air service (for £38.16s.-) between London and Valencia in 1957. It has a well-developed tourism industry and is a popular destination for British and Northern European tourists. It extends from the town of Dénia in the north, beyond which lies the Costa del Azahar (or Costa dels Tarongers), to San Javier in the south, beyond which lies the Costa Cálida.

In 711 AD the Moors invaded Spain through Gibraltar and would occupy the region of Alicante by 718 AD. Their occupation was to last nearly four hundred years and would mould the landscape of the region. The Moors introduced irrigation and the planting of oranges, peaches and almond orchards. The terraces seen on the hillsides throughout the region are an everlasting Moor legacy. The Moors would not be completely expelled until 1492, when Ferdinand and Isabella, the Catholic monarchs, finally took control of Granada. In 1095 Spain became part of the North African Muslim Empire and for another four hundred years the Moors and Christians would fight over control of Spanish land. Alicante was gradually regained from the Moors in 1248 by James I of Aragon. After their expulsion, the Moors continued to attack Spain. Between 1500-c1650 Berber pirate attacks were frequent all along the Mediterranean coastline. The first Spanish Constitution was written in 1812 and following this the provincial boundaries were established, establishing the regions including Alicante and Murcia as they are today. In 1923,Miguel Primo de Rivera took control of Spain as a dictator, eventually forcing Alfonso XIII into exile. The Spanish Civil War, (1936–1939) would divide the country. Alicante and Murcia would remain supporters of the Republican movement. In 1939 General Francisco Franco, the leader of the nationalists took control of Spain. During the 1960s and 1970s tourism exploded throughout the region to nearly 4,000,000 visitors a year to reach around 6,000,000 + tourists a year in recent years.[